“Apart from the desire to produce beautiful things, the leading passion of my life has been and is hatred of modern civilization”

William Morris (1834-1896) was a writer, poet, designer, activist and one of the primary figures in the organic radical tradition.

As part of the Pre-Raphaelite arts movement, he expressed a deep and aesthetic aversion to the modern industrial world of the Victorian England into which he was born.

At the same time he understood that all the shallowness and ugliness he so despised had been created by the commercial mindset, by capitalism in fact, and he threw himself into left-wing libertarian politics, calling for a socialist revolution.

Biographer Stephen Coote explains that Morris had become “acutely aware of something rotten at the very core of society”. (1)

Morris himself wrote that society “is grown so corrupt, so steeped in hypocrisy and lies, that one turns from one stratum of it to another with helpless loathing”. (2)

In the essay ‘How I Became A Socialist’, written two years before his death, Morris declared: “Apart from the desire to produce beautiful things, the leading passion of my life has been and is hatred of modern civilization”. (3)

It had become clear to him that the “eyeless vulgarity” of the capitalist world had destroyed art, he said: “The hope of the past times was gone, the struggles of mankind for many ages had produced nothing but this sordid, aimless, ugly confusion; the immediate future seemed to me likely to intensify all the present evils by sweeping away the last survivals of the days before the dull squalor of civilization had settled down on the world”. (4)

Like Ferdinand Tönnies, who was writing at the same time, Morris identified the commercial spirit, the obsession with money, as being the key to the vulgarity of contemporary society.

In A Tale of the House of the Wolfings (1889), he adopted motifs from Icelandic literature to create a narrative in which “he contrasts the commercial individualism of the Romans to the communal life of the Gothic tribe”. (5)

“Is money to be gathered?” Morris asked in ‘The Lesser Arts’. “Cut down the pleasant trees among the houses, pull down ancient and venerable buildings for the money that a few square yards of London dirt will fetch; blacken rivers, hide the sun and poison the air with smoke and worse and it’s nobody’s business to see or it or mend it: that is all that modern commerce, the counting-house forgetful of the workshop, will do for us herein”. (6)

Morris understood all too well that capitalist economics and industrial pollution are two parts of the same thing.

Coote notes: “That commercialism was the chief polluter of the English countryside was a point Morris repeatedly made with a passion that seems ever more relevant to our times”. (7)

What futility in trying to reform capitalism to make it “greener” or “sustainable”, or in trying to manage away social tensions in urban society, when the problem lies in the whole underlying structure of capitalism itself!

Morris wrote in ‘Useful Work Versus Useless Toil’, in 1885: “All our crowded towns and bewildering factories are simply the outcome of the profit system. Capitalist manufacture, capitalistic exchange, force men into big cities in order to manipulate them in the interests of capital.

“There is no other necessity for all this, save the necessity for grinding profits out of men’s lives, and of producing cheap goods for the use (and subjection) of the slaves who grind”. (8)

While some gullible “socialists” were happy to swallow the capitalist lie of “progress”, Morris saw that machine society was built solely on the desire to exploit.

He wrote of so-called “labour-saving” machines: “What they really do is to reduce the skilled labourer to the ranks of the unskilled, to increase the number of the ‘reserve army of labour’ – that is, to increase the precariousness of life among the workers and to intensify the labour of those who serve the machines (as slaves their masters)”. (9)

Morris saw clearly that employment often amounted to nothing more than “slaves’ work – mere toiling to live, that we may live to toil”. (10)

He added: “Most people, well-to-do or not, believe that, even when a man is doing work which appears to be useless, he is earning his livelihood by it – he is ‘employed’ as the phrase goes; and most of those who are well-to-do cheer on the happy worker with congratulations and praises, if he is only ‘industrious’ enough and deprives himself of all pleasure and holidays in the sacred cause of labour.

“In short, it has become an article of the creed of modern morality that all labour is good in itself – a convenient belief to those who live on the labour of others”. (11)

Morris contrasted the “sham art” (12) of capitalism with the authentic art produced by craftsmanship.

Real art was derived not from sterile machinery but from living Nature, who expressed herself through the skill and sensibility of the artisan.

This principle was very much reflected in Morris’s celebrated textile and wallpaper designs and also, writes Alfred Noyes, in his poetry, where “the beats change with absolute spontaneity just as the thought or emotion dictates; … with the natural and harmonious freedom and flexibility of organic life”. (14)

This “deep, sensuous response to nature” (15) led Morris, says Coote, towards the idea of peasant art – “the art of ordinary people living in harmony with nature, unstrained and intuitively moral”. (16)

He and his fellow Pre-Raphaelites found this art, above all, in “the more cooperative world of the Middle Ages” which had been swept away by the “woeful artificiality” of ugly modern commercial-industrialism. (17)

They enthused over medieval architecture and over artists such as Albrecht Dürer, imitating the nature-inspired harmonious simplicity of these aesthetics.

In this, Morris and his friends in the Pre-Raphaelite Brotherhood were very much influenced by the art critic and writer John Ruskin, whom Morris described as one of the few people of his era “in open rebellion” (18) against the industrial system, its thinking and its tastes.

Ruskin, in his search for cultural renewal in the face of modern baseness, had urged the young artists of his day to “go to Nature… rejecting nothing, selecting nothing and scorning nothing”. (19)

Writes Coote: “When the second volume of The Stones of Venice and its great chapter on ‘The Nature of Gothic’ appeared in 1853, The Brotherhood discovered their sacred text.

“To Morris, reciting the book’s set-piece passages to his Oxford friends, Ruskin was the master who both formulated his deepest discontents and gave voice to his sense of mission.

“When, at the end of his career, Morris printed an edition of Ruskin’s ‘The Nature of Gothic’, he described it as ‘one of the few necessary and inevitable utterances of the century'”. (20)

Morris took Ruskin’s identification of a profound cultural and social malaise arising from industrialism, and took it in a more overtly radical political direction.

The anarchist Peter Kropotkin, living in England at the time, was one of the many radical left-wing visitors to Morris’s home during his years of energetic political organising.

Morris’s political engagement was very much a continuation of his cultural critique of industrial capitalist society. Noyes writes that “his socialism was the slow, inevitable outcome of his artistic sincerity – it was forced upon him as an artist by the conditions of modern life”. (21)

He understood that reform would not be enough to change the course of civilization and bring about the de-industrialized libertarian socialist society he describes, notably in News from Nowhere, which would be based on “benevolent nature and small, self-governing communities”. (22)

He wrote in a letter to Georgina Burne-Jones: “One must turn to hope and only in one direction do I see it – on the road to Revolution: everything else is gone now”. (23) 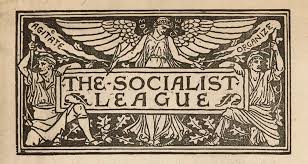 It was important for Morris that there was an informed vision for the future behind this revolution, so that when industrial capitalism fell, it would be replaced by a healthy new authenticity.

He wrote in a letter to the Daily News: “Discontent is not enough, though it is natural and inevitable. The discontented must know what they are aiming at when they overthrow the old order of things.

“My belief is that the old order can only be overthrown by force; and for that reason it is all the more important that the revolution… should not be an ignorant but an educated revolution”. (24)

The 1880s were marked by riots against the British imperial capitalist system and police brutality against socialist meetings.

This peaked with “Bloody Sunday” on November 13, 1887, when 80,000 to 100,000 protesters flooded the streets of London and Trafalgar Square was cordoned off by police in ranks four deep.

The rebellious crowds were attacked by police, leaving 200 in hospital and three of them dead. 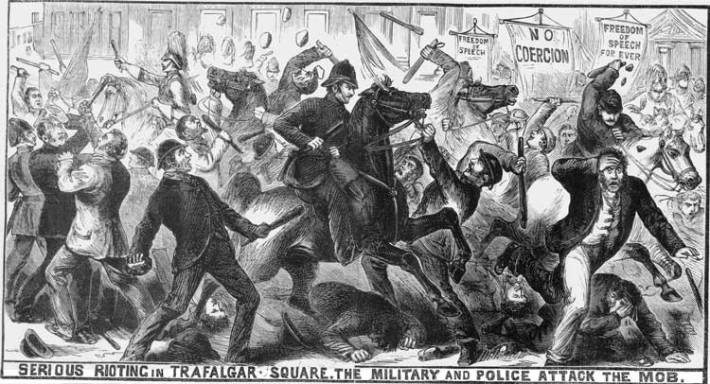 “Mounted police struck out with batons at the gathering crowds. Further away, three hundred foot soldiers with fixed bayonets and twenty rounds of ammunition each stood ready, supported by a battalion of Life Guards”. (25)

It is a familiar story at every time and in any place that the capitalist system is seriously threatened by popular revolt: the pretence of “democracy” is quickly abandoned in favour of direct physical violence in defence of its power.

The effect of this repression was to steer most of the British left on to the path of cowed reformism – the very dead end against which Morris was warning.