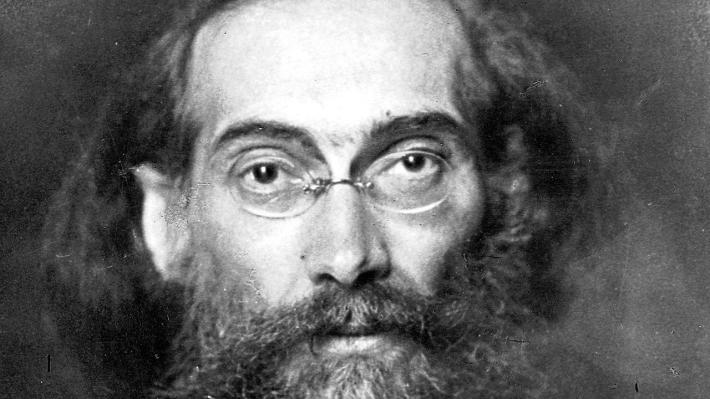 “Anarchy is life; the life that awaits us after we have freed ourselves from the yoke”

Gustav Landauer (1870-1919) was an important anarchist theorist and key precursor of organic radicalism.

He took part in the Bavarian Revolution at the end of the First World War but, with its collapse, he was arrested and murdered by proto-Nazi Freikorps soldiers in Stadelheim Prison, Munich.

Strongly influenced by Meister Eckhart, Novalis, Friedrich Hölderlin and Johann Wolfgang von Goethe, Landauer was very much part of the Romantic anti-capitalist tradition identified by Michael Löwy and has been described as representing “a left-wing form of the völkisch current in thought”. (1)

Like his friend Martin Buber, he saw a close link between human interrelationships and the rebirth of community which was needed to put society right.

Landauer also echoed the likes of William Morris and John Ruskin in condemning the “unculture” of industrial capitalist society.

He wrote in 1911: “Progress, what you call progress, this incessant hustle-bustle, this rapid tiring and neurasthenic, short-breathed chase after novelty, after anything new as long as it is new, this progress and the crazy ideas of the practitioners of development associated with it… this progress, this unsteady, restless haste; this inability to remain still and this perpetual desire to be on the move, this so-called progress is a symptom of our abnormal condition, our unculture”. (2)

His vision was based on living human communities, social organisms with their own guiding collective spirit or Geist, arising from below and from within. This is very much the idea of the authentic human community, the Gemeinschaft, described by Ferdinand Tönnies.

Landauer was inspired by organic medieval society, which he contrasted with contemporary top-down artificiality.

He wrote: “The state, with its police and all its laws and its contrivances for property rights, exists for the people as a miserable replacement for Geist and for organizations with specific purposes; and now the people are supposed to exist for the sake of the state, which pretends to be some sort of ideal structure and a purpose in itself, to be Geist…

“Earlier there were corporate groups, clans, gilds, fraternities, communities, and they all interrelated to form society. Today there is coercion, the letter of the law, the state”. (3)

Writes Charles Maurer: “The most obvious sign of the absence of Geist was for Landauer the plight of the industrial workers.

“Separated from the earth and its products and spiritually isolated from each other despite the closeness of their living conditions, they become victims of alcohol, disease, and poverty.

“The relationship between worker and employer becomes completely dehumanized through capitalism, technology, and the state”. (4)

Landauer bitterly opposed Marxists for remaining trapped in this mechanistic mindset and for failing to lead a deep and effective resistance to industrial capitalism.

Russell Berman and Tim Luke explain that, for Landauer, Marxism was itself “part of the problem posed by industrialization”. (5)

They add: “Marxism, despite its revolutionary appearance, functions in fact as an impediment to socialism. In the light of Landauer’s critique, nineteenth century scientific socialism ceases to appear as a radical critique of the status quo. Rather, behind its revolutionary pretenses, it buttresses the development of capitalist structures”. (6)

In his booklet For Socialism, Landauer was vehemently outspoken against the Marxists who had taken control of the socialist movement of which he considered himself a part.

He described their dogma as “the plague of our times and the curse of the socialist movement” (7) and bemoaned “the grotesque wrongness of their materialist conception of history” (8) in which they reduced everything to “what they call economic and social reality”. (9)

Landauer also hinted at his disquiet over the growing influence of Marxism, and its modes of thinking, on the anarchist movement.

He refered disparagingly to “the syndicalists and the anarcho-socialists, recently so-called by a pitiful misuse of two noble names” as the Marxists’ “brothers” (10) and specifically extended his condemnation to all Marxists “whether they call themselves Social Democrats or anarchists”. (11)

Still today, Landauer’s rich and powerful brand of anarchism is sometimes dismissed as “mystical” and therefore unacceptable to the shallow modern industrial world view adopted by too many so-called anarchists.

Like Constantin von Monakow, Landauer extended his concept of the organic to a cosmic level, regarding the universe as a living creature with a collective soul and writing that “the psyche [das Seelenhafte] in the human being is a function or manifestation of the infinite universe”. (12)

Landauer’s use of terms like Geist and Seelenhafte forms an inherent part of his anarchism, flowing naturally from the rest of his philosophy.

He was opposed to all private land ownership, declaring: “All ownership of things, all land-ownership is in reality ownership of men. Whoever withholds the earth from others, from the masses, forces these others to work for him. Private ownership is theft and slave-holding”. (13)

He was equally opposed to the power of the state favoured by his Marxist rivals, which destroyed authentic and organic society inspired by the collective Geist.

The idea of Geist also fed into Landauer’s ideas regarding revolution, along with his related concept of Wahn, a kind of motivating resonance which could bring about sudden radical change.

He explained: “Wahn is not only every goal, every ideal, every belief in a sense of purpose of life and the world: Wahn is every banner followed by mankind; every drumbeat leading mankind into danger; every alliance that unites mankind and creates from a sum of individuals a new structure, an organism”. (14)

Landauer said the spark for revolution was always the stupidity, brutality or weakness of rulers, but that “the people, the thinkers, the poets are a powder keg, loaded with spirit and the power of creative destruction”. (15)

The energy of Wahn would ensure that this powder keg ignited: “There is no need to fear a lack of revolutionaries: they actually arise by a sort of spontaneous generation – namely when the revolution comes.

Anarchism, said Landauer, was “a collective name for transformative ambitions” (17) and its role was to encourage Wahn and help create the resonance of revolution.

In this way it could rid the human social organism of the stifling restrictions imposed by property, the state and industrialism and allow it to breathe and flourish in a free and natural way.

As Landauer famously declared: “Anarchy is life; the life that awaits us after we have freed ourselves from the yoke”. (18)