Fritjof Capra (1939-) is a scientist and writer whose holistic ecological vision stresses the interconnectedness of the living universe in opposition to the machine-thinking of industrial capitalism.

In a 2015 interview, he said his life’s work had involved “the unfolding of a new vision of reality, and the social implications of this cultural transformation”. (1)

“The view of the human body as a machine and of the mind as a separate entity is being replaced by one that sees not only the brain, but also the immune system, the bodily organs, and even each cell as a living, cognitive system”. (2)

The new outlook promoted by Capra challenges the modern mechanistic philosophy launched by René Descartes in the 17th century – a dualistic dogma which divides reality into that of mind (res cogitans) and that of matter (res extensa). 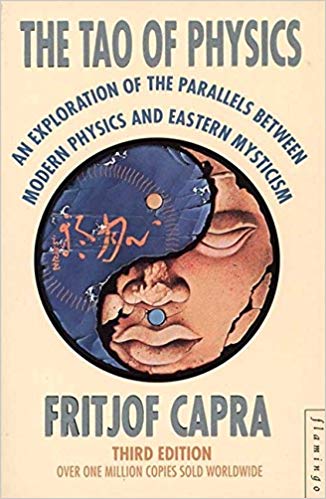 As he explained in his influential 1975 book The Tao of Physics: “The ‘Cartesian’ division allowed scientists to treat matter as dead and completely separate from themselves, and to see our material world as a multitude of different objects assembled into a huge machine”. (3)

Against this, Capra puts forward an alternative philosophy in which “the cosmos is seen as one inseparable reality – for ever in motion, alive, organic; spiritual and material at the same time”. (4)

This basic oneness is revealed by Quantum theory, in which “the whole universe appears as a dynamic web of inseparable energy patterns”, he says. “Both force and matter are now seen to have their common origin in the dynamic patterns which we call particles”. (5)

Capra identifies this same organic worldview in the Eastern spiritual tradition and, more generally, in the perennial philosophy which lies behind the metaphysics of Georg Hegel, René Guénon, Ananda Coomaraswamy, Frithjof Schuon and Seyyed Hossein Nasr.

He writes: “The parallels to modern physics appear not only in the Vedas of Hinduism, in the I Ching or the Buddhist sutras, but also in the fragments of Heraclitus, in the Sufism of Ibn Arabi, or in the teachings of the Yaqui sorcerer Don Juan”. (6)

This spirituality has nothing to do with the kind of religion which invents a hierarchical cosmic order in order to justify hierarchy and domination in everyday life, he stresses.

“The Eastern image of the Divine is not that of a ruler who directs the world from above, but of a principle that controls everything from within”. (7)

Like Nasr, Capra interprets the Indian concept of maya as describing the blindness which prevents us from seeing the overall reality of unity behind the superficial and illusory separateness of things.

He writes: “To be free from the spell of maya, to break the bonds of karma means to realize that all the phenomena we perceive with our senses are part of the same reality.

“It means to experience, concretely and personally, that everything, including our own self, is Brahma. This experience is called moksha or ‘liberation’ in Hindu philosophy and it is the very essence of Hinduism”. (8)

Looking at Taoism, Capra finds that the notion of a natural order to things, emerging from within rather than from above, is central to its thinking.

He describes the Chinese tradition as “concerned primarily with the observation of nature and the discovery of its Way, or Tao. Human happiness, according to the Taoists, is achieved when one follows the natural order, acting spontaneously and trusting one’s intuitive knowledge”. (9)

Capra says thinkers such as Chuang Tzu saw the network of life as moving and changing according to cyclical patterns, which they observed in the sun and moon and the processes of growth and decay in nature.

This quality is sometimes indicated by the word li, which the 12th century philosopher Chu Hsi described as “the innumerable vein-like patterns included in the Tao”. (10)

Patterns and texture, rather than fixed structure, are also key to modern scientific thinking, explains Capra. “The subatomic world is one of rhythm, movement and continual change. It is not, however, arbitrary and chaotic, but follows very definite and clear patterns”. (11)

This is the concept of natural order as understood by anarchists: an ever-changing but coherent order which arises from within and from below without the need for external control.

In the 2015 interview, Capra spoke of his interest in the philosophy of deep ecology, which he said could be an ideal bridge between science and spirituality.

He added: “The defining characteristic of deep ecology is a shift from anthropocentric to ecocentric values.

“It is a worldview that acknowledges the inherent value of non-human life, recognizing that all living beings are members of ecological communities, bound together in networks of interdependencies”. (12)