“Rapacious industrialism, whether capitalist or communist, is embedded within the values of modernity”

Charlene Spretnak (1946-) is a writer, speaker and activist on cultural history, social criticism, spirituality and art.

She is a notable critic of the mechanistic worldview which has developed with industrial capitalism and shaped contemporary systems of knowledge in her native USA and elsewhere.

Spretnak, like Renaud Garcia, extends her criticism to deconstructionist forms of postmodern thinking which insist “there is no ‘real'”, but only social construction. (1)

Against that she puts forward a radical organic philosophy which recognises humanity and its culture as belonging to a holistic all-embracing living physical reality. 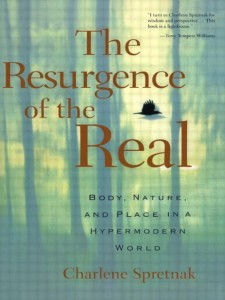 Spretnak wrote in her 1997 book The Resurgence of the Real: “All human thought, social or individual, is also situated in the processes of body, nature and place”. (2)

Like Michael Löwy, she also offers a fascinating ideological overview of the way in which radical organic philosophy surfaces from time to time in history, only to be forced underground again by the dominant system.

She argues: “A substantive tradition stands behind the contemporary resurgence of body, nature, and place, which, if better understood, could be a source of inspiration.

“That lineage includes the Romantic movement, the Arts and Crafts movement, the cosmological and spiritual quests in schools of painting, the counter-modern Modernists, Gandhi’s Constructive Program, and the counterculture”. (3)

Spretnak explains that repression of these critiques of modernity is achieved partly through the way the historical myth of “progress” is presented.

She writes: “The complex transition from the holistic (but hierarchical) medieval worldview to the modern mechanistic one came to be expressed as a simplistic reduction holding great allure: the passage from the Dark Ages to the Enlightenment. Has there ever been such a starkly black and white framing of history?” (4)

Instead, she describes four major stages in the development of the modern world and its fragmented thinking: the Renaissance, the Reformation, the Scientific Revolution and the Enlightenment, at which point “the human being was now seen as a biomechanical machine, as was the entire universe”. (5)

Spretnak tackles head-on the disingenuous argument that because the rhetoric of the German Nazis included a certain rejection of the modern world and valuing of nature, all such views now represent a slippery slope to fascism.

She explains: “In Germany today, members of the left and other rationalists, for instance, insist that Nazism resulted from ‘the natural progression of capitalism’ plus the influence of ‘the irrational’ (spiritualities that honored nature, body and community in ways that replaced rational politics).

“Therefore, any talk of spirituality or a social dimension of nature will lead us straight back to fascism, according to these ‘politically sophisticated’ analysts.

“I find it fascinating that an analysis with such a gaping hole at the center could gain such popularity, much like the similar conclusion that opposition to modernity is inherently reactionary and leads to fascism.

“Both of these conclusions ignore the ways in which people’s discontents with modernity were used by the Nazis in their quest for domination.

“All concerns about modern life were supposedly resolved by National Socialism. The concerns themselves and the articulation of them did not ‘lead to fascism’.

“Rather, fascism triumphed because sufficient numbers of people enthusiastically accepted one cynical party’s ideological response to those concerns”. (6)

In a 2006 interview, Spretnak described how her work has sought to show that modernity has constructed a system of assumptions to deflect criticism.

She explained: “In addition to identifying the crises of modernity – particularly in the areas of economics, politics, and education – as well as the corrective efforts that are emerging now, I sought to clarify the conceptual infrastructure of modernity, that is, its interlocking systems of beliefs and assumptions.

“You’d be surprised how many people are oblivious to that ideology, even though it shapes our socialization from day one and all our institutions. We’re taught to regard it as ‘just natural’ for an advanced civilization.

“Ecological activists, for instance, are often puzzled to find that their efforts seem to bounce off a brick wall; that’s because they’re deflected handily by the ideologies of modernity – not corporate capitalism alone. On the contrary, rapacious industrialism, whether capitalist or communist, is embedded within the values of modernity.

“I explain how that entire worldview – and the ‘modern condition’ – came to be. Needless to say, it’s a somewhat different version than we received in modern schooling”. (7)

Asked to explain what these modern assumptions were, she replied: “A core assumption of modernity is that the human is essentially Homo economicus. Consequently, the structure and quality of all other endeavors in life are thought to derive from the economics of a society.

“‘Unfettered’ economic expansion, through industrialization and computerization, is believed to yield abundance, well-being, the solution to social problems, and the evolution of culture and society”.

She warned: “In light of the deeply held modern belief that society progresses in opposition to nature, it’s extremely difficult for voices for ecological sanity to capture the public attention for a sustained corrective effort”. (8)

Spretnak has a strong interest in the 19th century organic radicalism of John Ruskin and William Morris, whose work she discovered by chance while visiting England.

In The Resurgence of the Real she describes “an extraordinary period of discovery for me, a communion that shaped me, somehow, from then on”. (9)

She said in the interview: “Ruskin, the preeminent art critic of Victorian England, and Morris, who was greatly influenced as a young man by Ruskin’s writings, were profound eco-social philosophers and activists who refuted the destructive assumptions of modernity and created alternatives, quite in sync with the orientation I call ‘ecological postmodernism’.

“They went far beyond an economic analysis and countered the corrosive effects of the modern project by focusing in immediate and accessible ways on work, home, art, nature, vernacular culture, and the unfolding of persons in relationship”. (10)

Spretnak champions holistic and relational thinking and in a 2014 talk in New York (11) identified a number of early 21st century medical findings challenging the prevailing view that the human organism is nothing more than a very complicated bio-machine. These discoveries, she said, showed dynamic interrelationship playing a more important role.

Direct or observed violence in childhood, for instance, shortened life expectancy. Other research had showed that closeness to nature was related to better physical health.

Her other books include Lost Goddesses of Early Greece: A Collection of Pre-Hellenic Myths (1978), States of Grace: The Recovery of Meaning in the Postmodern Age (1991) and Relational Reality: New Discoveries of Interrelatedness That Are Transforming the Modern World (2011). 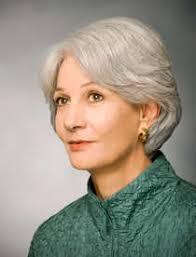