“Mind is not born as a tabula rasa”

Carl Jung (1875-1961) was a highly influential 20th century thinker and writer, a practising psychiatrist and the founder of analytical psychology.

His central concept was of a universal human unconscious which informs the thinking and being of each and every individual.

This idea of an inner pattern to the human mind, of innate tendencies informing everything we think and do, is crucial for the classical anarchist, and thus organic radical, vision.

It underpins Peter Kropotkin’s suggestion of a sense of mutual aid for which human beings (and all other animals) have a natural capacity and even inclination.

It is because we are born with the potential for co-operation, for an appreciation of right and wrong, justice and injustice, that it is not only unnecessary but also unhealthy to impose upon us social structures and laws which block the functioning of our natural collective sensibilities.

The deep ideological significance of Jung’s philosophy was appreciated by, among others, the English anarchist Herbert Read, who befriended Jung and edited his works.

Another anarchist friend of Jung’s, Otto Gross, described how these universally-shared innate anarchistic tendencies were repressed by contemporary capitalist society.

Jung’s work also reinforces anarchist Noam Chomsky’s criticism of the very prevalent “empty organism” fallacy, in which human beings are imagined to be born with blank slates for minds.

Jung insisted: “Mind is not born as a tabula rasa. Like the body, it has its pre-established individual definiteness; namely, forms of behaviour. They become manifest in the ever-recurring patterns of psychic functioning. 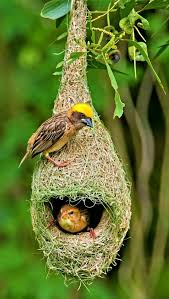 “As the weaver bird will build its nest infallibly in its accustomed form, so man despite his freedom and superficial changeability will function psychologically according to his original patterns – up to a certain point”. (1)

Behind the invisible structure of our innate mind, Jung saw the existence of archetypes, which James Hillman describes as “the most fundamental patterns of human existence”. (2)

Jung himself made it clear that these archetypes were very real: “Archetypes are not whimsical inventions, but autonomous elements of the unconscious psyche which were there before any invention was thought of. They represent the unalterable structure of a psychic world whose ‘reality’ is attested by the determining effects it has upon the conscious mind”. (3)

But, at the same time, like Chomsky’s ability to learn language, they emerged initially in the shape of a capacity, a potential which needed to be triggered by contact with the outside world.

Explained Jung: “They are eternally inherited forms and ideas which have at first no specific content. Their specific content only appears in the course of the individual’s life, when personal experience is taken up in precisely these forms”. (4)

Jung, a German-speaking Swiss, was clearly influenced by the German Romantic tradition but later in life expanded his research further afield to reinforce its universal relevance.

His belief in a “world soul”, humanity’s collective unconscious, was inspired by his conversations with black mental patients in the USA, with North American Indians, with Tunisians and with East African tribespeople. (5) 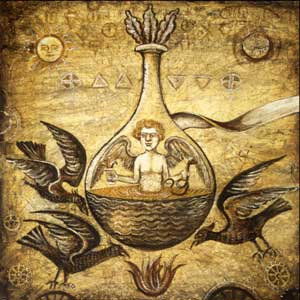 Inspired by the alchemical tradition, Jung saw a positive life energy inside every human being, which his psychoanalytical methods sought to uncover and empower.

He wrote in Psychology and Alchemy: “The substance that harbours the divine secret is everywhere, including the human body. It can be had for the asking and can be found anywhere, even in the most loathsome filth”. (7)

Richard Noll refers to this approach as “Jung’s promise of liberation, of freedom, of becoming a continually self-re-creating individual in a state of constant becoming, a perpetual revolution of the soul”. (8)

Jung’s therapeutic approach is anarchic, being based on allowing healthy energy to arise from within the person, rather than trying to repress supposedly unhealthy traits.

Jung wrote: “It is rewarding to watch patiently the silent happenings in the soul, and the most and the best happens when it is not regulated from outside and from above”. (9)

Art, for Jung, was essentially the same process taking place. The universal living energy was channelled by the individual artist to carry out their work. 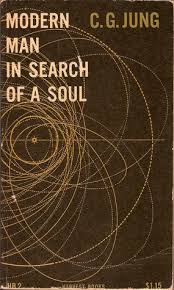 “Art is a kind of innate drive that seizes a human being and makes him its instrument. The artist is not a person endowed with free will who seeks his own ends, but one who allows art to realize its purposes through him”. (10)

Jung said the living spirit behind human creativity, in all fields, was eternally renewed and had been constantly shaping, guiding and inspiring us throughout the existence of our species.

It appeared in so many guises that it was impossible to define it in any rigid way: “Measured against it, the names and forms which men have given it mean little enough; they are only the changing leaves and blossoms on the stem of the eternal tree”. (11)